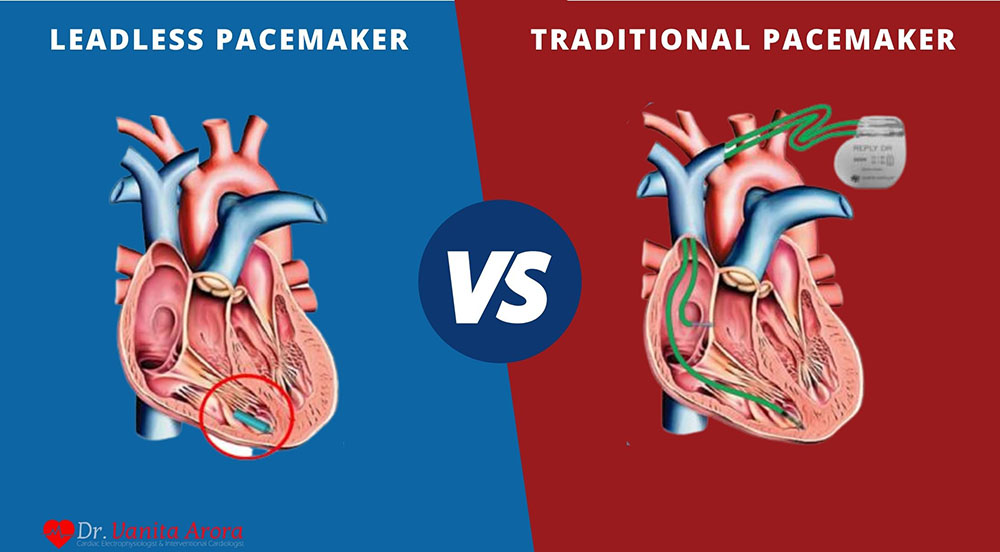 Dr. Vanita, the best pacemaker doctor in Delhi, published an article on Medgate Today where she explains, “Although complications with traditional pacemakers are infrequent, but when they occur, they’re expensive to treat and invasive for the patient”.

According to the best heart specialist in Delhi, the use of leadless pacemakers reduces the chance of developing procedure-related pneumothorax, pocket-related hematoma, and device-related infections by 63%.

Why Do Leadless Pacemakers Pose “Little to No” Risk of Infection?

There are many reasons behind it. The location of the device, material used for making the device, minimal skin and glove contact, lack of leads and subcutaneous pocket make leadless pacemakers more infection-resistant compared to transvenous pacemakers. Device encapsulation further reduces the device’s surface area exposed to bacteria.

In the latter, the risk varies somewhere between 0.77% (initial implant) - 2.08% (replacement/revision procedures). As of August 2020, no cases of device-related infection caused due to leadless pacemakers were reported in clinical trials conducted on over 3000 patients.

Therefore, the mortality and morbidity associated with leadless cardiac pacemakers are extremely low. Infact leadless pacemaker is the implant of choice if the previous implant site gets infected or if patient has systemic infection, the best pacemaker doctor in Delhi explained.

How Dangerous Are Pacemaker-Related Infections?

Even though the risk of infection caused due to transvenous pacemakers is near to 2%, when it does happen, it leads to 25% one-year mortality in patients despite appropriate therapy. Hence, these infections are of grave concern. Not to mention, these complications prove to be costly for the healthcare system. This gives us strong motivation to prevent pacemaker-related infections and the development of leadless pacemakers is the result of that.

Research suggests that when these pacemakers are implanted even during an active infection, the probability of them causing device-related infections is again negligible.

For her immense contribution in cardiology and electrophysiology, Dr. Vanita has been bestowed with “Chikitsa Rattan Award”, “Distinguished Service Award”, “Best Case Report Award in Cardiology”, “Healthcare Personality of the Year 2016”, and many such honors.

If you wish to schedule an appointment with Dr. Vanita, fill this form or email her at doctorvanitaarora@gmail.com. You may also dial +91 98738 79994.