HIS Bundle Pacing by best cardiologist in Delhi NCR 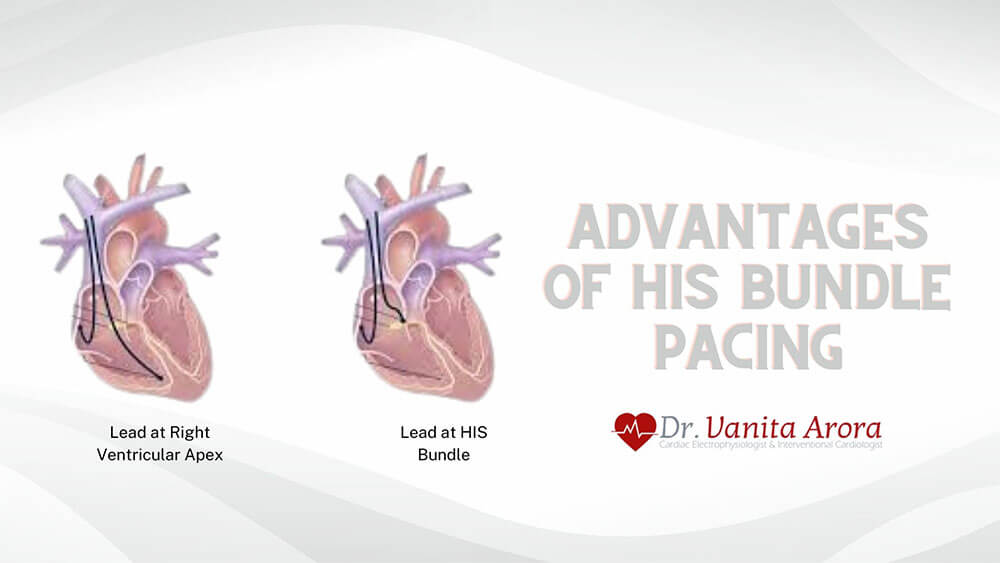 The optimal site for ventricle pacing is still a matter of debate in the medical community. Doctors have found success in treating patients with bradyarrhythmia before, yet they continue to search for new improved ways to reduce long-term complications, improve outcomes, and treat their patients.

According to the best cardiologist in Delhi NCR, the mechanical and electrical pacing of the right ventricle can lead to an increased risk of hospitalization, more so in patients suffering from reduced left ventricular ejection fraction (LVEF).

To minimize the right ventricle pacing burden, alternative pacing sites have been suggested in many studies. His bundle pacing is one such alternative. It is a method of delivering permanent pacing by activating the His-Purkinje system, the top cardiologist in Delhi NCR explained.

But before we study the benefits of His bundle pacing, we’ll cover the basics of heart anatomy first.

What is the Bundle of His?

In 1893, a Swiss cardiologist named Wilhelm His discovered the specialized muscle fibres (also called the bundle of his, today) that run along the partition of the right and left heart chambers.

Wilhelm His discovered that this bundle of muscle fibres is responsible for communicating heart rhythm contraction to every part of the human heart. Hence, in His bundle pacing, doctors deliver permanent pacing for physiological ventricular activation, the best cardiologist in Delhi NCR explained.

It brings us to our next section.

Benefits of His Bundle Pacing

Let’s look at some of the advantages of His bundle pacing:

Now that you’re aware of the advantages, here’s how you can book an appointment to get an expert medical opinion from Dr. Vanita whether you need His bunding pacing:

Contact Dr. Vanita
Dr. Vanita is a pioneer in electrophysiology and an authority figure in His bundle pacing. Honored with numerous awards, the top cardiologist in Delhi NCR has treated several patients in the last three decades. Dr. Vanita is known for ablation surgery, pacemaker implantation, coronary interventions, and other groundbreaking medical procedures.

If you wish to contact her, call +91 98738 79994 or email doctorvanitaarora@gmail.com. Or you may schedule an appointment on her website instead. Just fill the form on the given link and hit ‘Submit’!