Fast rhythms beginning in your ventricles are called Ventricular Tachycardia (VT). during VT, the ventricular contraction are fast but regular and the heart may beat as fast as 200 to 400 beats per minute. VT often causes your ventricles to lose their pumping efficiency and could result in insufficient blood being pumped by the heart to your brain and other organs. As a result of symptoms like palpitation, dizziness, shortness of breath and even loss of consciousness can occur.
VTs may occur in individuals who have heart diseases like:
Less frequently, VT can occur from rare inherited heart defects (long QT syndrome etc), or even unknown causes. Ventricular tachycardia can be dangerous, even life- threatening if not properly treated.
At times, regular VT can degenerate into completely irregular, unstable and chaotic electrical activity wandering around randomly in the ventricles. As a result, instead of contracting, the ventricles just quiver ineffectively and no blood is pumped by the heart to the brain and other organs, including the heart itself. This quivering of ventricles as a result of chaotic electrical activity is called Ventricular Fibrillation (VF). the patient loses consciousness immediately after the commencement of VF and death occurs within minutes unless life-saving therapy is administered to the heart. 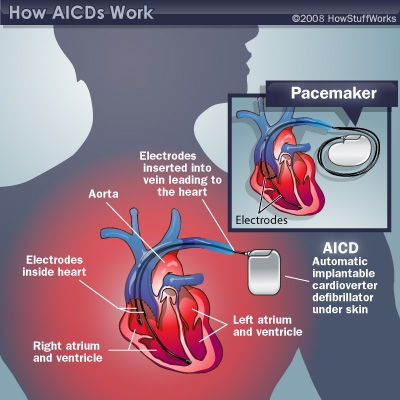 What is Sudden Cardiac Arrest?

Sudden Cardiac Arrest (SCA) is the sudden, abrupt cessation of pumping of blood by the heart leaving to immediate loss of consciousness and death.
The most common cause of SCA is ventricular tachycardia and ventricular fibrillation. SCA can occur without any warning and if the patient is to have any chance of survival he or she must be treated within a defibrillation shock within about 6 minutes.
Defibrillation is a technique in which a brief high-energy electric shock is administered to the heart to treat life-threatening arrhythmias. The therapy can be given externally across the patient’s chest using the external defibrillator or internally using an implantable defibrillator. The shock passes through the hearts, stops the erratic electrical activity that caused the cardiac arrest and allows the heart to return to a more regular rhythm.
Cardiac arrest is different from a heart attack. During a heart attack the blood flow to proportions of heart muscles is interrupted due to blockage in the arteries that supply blood to the heart muscles. These portions of heart muscle are therefore deprived of oxygen and get damaged or even die. Usually, however, the rest of the heart muscle still functions properly and the patient’s heart continues to pump blood, unlike during cardiac arrest. Book an appointment with the best cardiologist in South Delhi for more details.

Which Patients are at a High-risk of dying from sudden Cardiac Arrest?

Since the most common cause of SCA is a VT or VF, patients who have already experienced VT or VF or whose heart condition makes them vulnerable to developing VT or VF are at the highest risk of suffering from SCA.
Various clinical studies that have studied patient risk for VT/VF and SCA suggest that the following groups of people are at highest risk for the SCA: Patients who have episodes of VT but don’t experience serious symptoms during these episodes could also be at high-risk and need to be further evaluated and suitable treated. Patients who have suffered heart attack who have a poor heart pumping efficiency and whose heart process the triggers for causing VT/VF could also be at high risk for SCA. They must the carefully evaluated and suitable treated. In addition to the above, patients who have dilated hearts (dilated cardiomyopathy) coupled with low heart pumping efficiency or heart failure, patients with abnormally thick ventricular muscle (hypertrophic cardiomyopathy) and some other structural heart problems could also be at high risk for SCA due to VT/VF. These patients too must be closely evaluated and suitable treated.

What therapies are available to manage patient at high risk for SCA?

Until the mid 1980s, ventricular tachycardia was treated mainly with medications. These medications work by reducing the frequency of occurrence of VT/VF and in this way attempt to prevent SCA. While these drugs do not reduce the frequency of VT or VF, clinical studies have shown that in very high-risk groups of patients the best drug available today are only partially effective in preventing SCA. Moreover, some of these drugs can have serious side-effects and studies have shown that upto 40% of patients do not take their medications regularly. All the same drugs continue to play a vital role in the management of patients with ventricular tachycardia. They are often used in conjunction with the other treatment options available for the management of SCA. Radiofrequency ablation (or burning) is emerging as another treatment option for VT. this involves the insertion of shock, thin tubes called catheters into heart through a vein. Once inside, these catheters are used to deliver energy to small portion of heart tissues that are responsible for starting or maintaining the VT. The energy heats up and destroys this portion of heart tissues and thereby prevents the VT from recurring. With the currently available technology, radio-frequency ablation has been successful in the treatment of very few types of VTs and is not yet a suitable treatment for the vast majority of the VTs encountered. Another way to treat VT/VF and prevent SCA is with a device called an Implantable Cardioverter Defibrillator (ICD).

What is an ICD?

An ICD is a device that is implanted inside your body to treat VT and VF and thereby prevent Sudden Cardiac Arrest (SCA).
It works automatically by constantly monitoring your heart rates and detecting VT or VF episodes as soon as they begin. When an ICD attack detects and episode of VT or VF it immediately delivers therapy in the form of low energy electrical pulses or electric shocks to terminate the arrhythmias before they can harm the patient.
The ICD is part of a system that the two main components-the ICD itself and the leads. The ICD is made of titanium metal and contains battery, a microprocessor (small computer) and electronic circuitry.
The leads are insulated wires that are threaded through a vein from the ICD to the inside of your heart. These serve to carry electrical signals from the heart to the ICD enabling the ICD to constantly monitor your heart rate and identify VT/VF episodes when they occur. The leads also serve to carry electrical impulses and shocks from the ICD to heart to terminate VT/VF.
Today’s ICDs are capable of providing four types of therapies that can be programmed by your doctor:

How effective are ICDs? :

The ICD was invented more than two decades ago with the specific purpose of automatically detecting and terminating life-threatening arrhythmias that cause SUdden Cardiac Arrest (SCA). Today, they are considered the most effective therapy available for the treatment of patients who are at high risk for SCA due to VT/VF. The electrical therapies provided by an ICD are upto 99% effective in terminating VT and VF.
Clear proof of the superiority of ICDs in preventing SCA over the currently available medicines for the arrhythmia management has emerged for a number of clinical trials. Based on three trials, expert committees across the worlds have recommended ICD therapies in preference to other therapies in patients who are at high risk of suffering from SCA due to VT/VF. On an average, patients who receive ICD therapy are likely to live significantly longer than those who are managed solely with medications.
Approximately 200000 ICDs are being implemented per year worldwide (2004) and the number of implants is growing at rapid rate.

How is an ICD implanted?
The ICD implant operation is not an open-heart surgical procedure. Infact, it is relatively simple procedure that is performed under local anesthesia and usually takes about two hours.
The ICDs usually implanted under the skin, in the left (and rarely in the right) chest area, just below the collarbone. The ICD leads are inserted into one of the veins located in chest area that lead to the heart. The leads are pushed through these veins until they enter the heart and may contact with the heart tissues. The other end of the leads are inserted into the ICD.
Once the leads have been placed and connected to the ICD, the ICD system’s function is tested to ensure that it can effectively detect and terminate dangerous ventricular arrhythmias.
Patients are usually discharged from the hospital within 2 to 5 days after the ICD is implanted.

What type of lifestyles do ICD patients typically lead?

Upon the advice of their physician ICD patients can lead normal lifestyle which includes: Depending on the patient’s condition, the doctor may recommend avoiding situations where a few seconds of unconsciousness due to a rapid heart rhythm could be dangerous to the patient or others. Such activities may include driving, swimming, working with heavy machinery, etc.
Patients with ICDs can safely operate both home and office electrical appliances.
ICD patients must strictly adhere to the routine follow up schedule established by their doctor. In addition, when a patient feels symptoms or receives a shock, the patient must contact his or her physician. To book an appointment online with Electrophysiologist in Delhi - Dr. Vanita Arora, please contact us.