Why you need a pacemaker?

Your heart has an electrical system that keeps it beating at the right pace. Problem with this system can make your heart beat too slowly. Pacemaker implantation in India correct a slow heartbeat, your doctor may recommend a pacemaker. This article will help you learn what a pacemaker is and how it's placed in the body. You'll also find out how a pacemaker can improve your health and help you lead a more active life.
A slow heartbeat
Blood carries oxygen throughout the body. When the heart beats too slowly, less oxygen is delivered to where it's needed in the body. This can cause symptoms such as:

Older people are more likely to develop a slow heartbeat. But the problem can occur at any age. Below are some common causes:
How the problems diagnosed?
To decide whether a pacemaker is needed, your doctor will ask about your symptoms and health history. You'll also have tests that check the speed and rhythm of your heartbeat. These include a painless test called an electrocardiogram (ECG). you may also be asked to wear a small electronic device, such as a Holter monitor or event recorder. These information about your heartbeat over a period of hours or days.

How can pacemaker help?

A pacemaker does exactly what its name says: It helps keep your heart beating at the right place. This reduces symptoms of a slow heartbeat. It can also let you take medications that would otherwise slow your heartbeat too much. Best of all, a pacemaker can improve your lifestyle by letting you be more active. Keep in mind, though, that having a pacemaker is a lifelong commitment. You'll need to see your doctor for regular checkups. You'll also need to take good care of your heart. But these things are more than worth it to keep your heart working well. 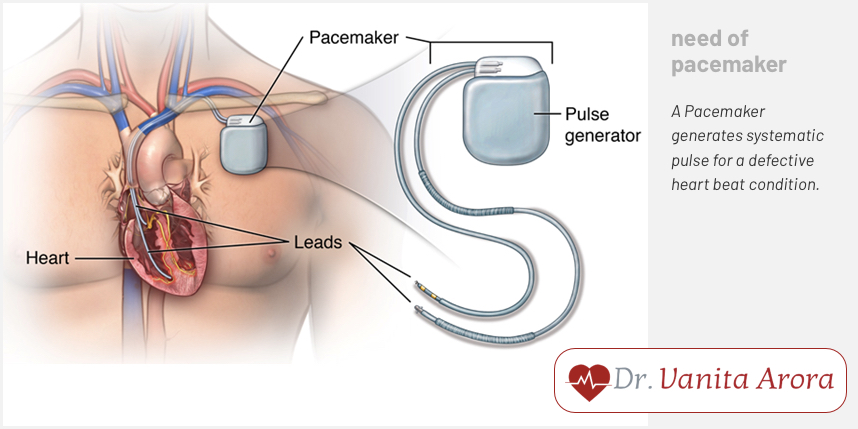 Your heart's electrical system
Your heart is a muscle that pumps blood throughout the body. It does this using an electrical system that tells your heart when to contract (squeeze). If there's a problem with this electrical system, your heart may not beat as fast or as often as it should. This means that the heart can't pump as much blood as the body needs. When that happens, you can have symptoms such as lightheadedness as fatigue.
Signals tell the heart to beat
Each heartbeat starts with an electrical signal. The signals are sent and received by special electrical cells within the heart called nodes. As the signals move through the heart, they tell the chambers that pump blood (called atria and ventricles) when to contract. When you are active, the signals from the nodes speed up to pump blood faster. When you're resting, the signals return to a normal pace.
Problems with electrical signals
A slow heartbeat is often due to problems with the SA node or AV node. In some cases,the heartbeat is slow only once in a while. In others, the heart may beat slowly all the time. And sometimes the heart fails to raise the heart rate during increased physical activity. If either of the nodes fail to send a signal, the heart may go into an "escape rhythm". This means it continues to beat, but at a slower and less reliable pace.
Sick sinus syndrome
The main problem that affects the SA node is called sick sinus syndrome. It can cause any of the following:

Heart block occurs when the AV node has problem passing on electrical signals to the ventricles. It can be caused by problems with either the AV node or the bundle branches. If the ventricles don't contract. This may happen only once in a while. Or, the signal may be blocked all the time.

A pacemaker is small, lightweight electronic device that helps correct a slow heartbeat. It does this using a tiny computer to send electrical signals to your heart. The signals tell the chambers in your heart when to contract. This keeps your heart beating at the right pace. Sensors in the pacemaker also keep track of your activity level and can adjust the signals as needed. 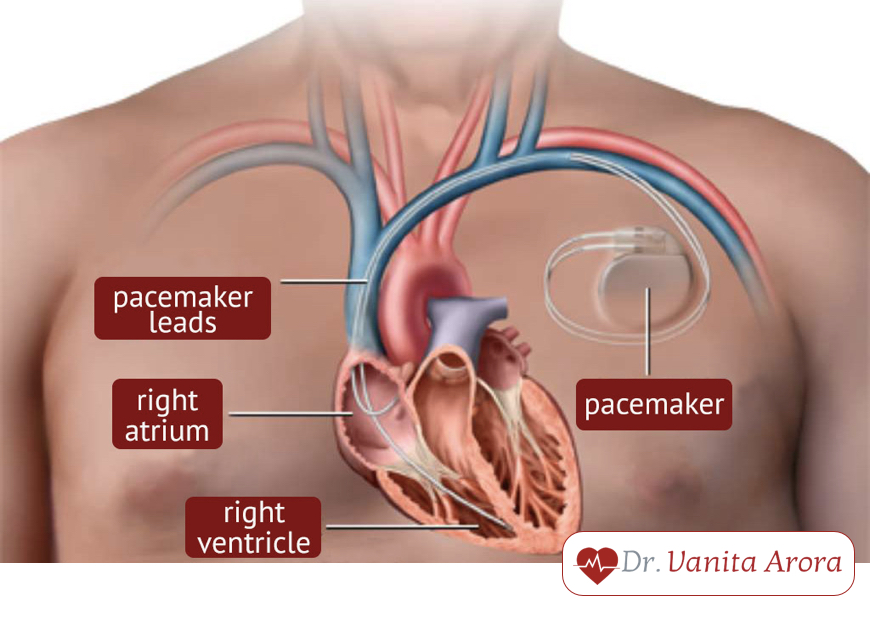 The parts of pacemaker

Below are the three main parts:

Your doctor will choose the type of pacemaker that's best suited for your condition. All pacemakers have the same basic design. The main difference is the number of leads that go to the heart. Most pacemakers have one or two leads. If you have a condition called advanced heart failure, you may be given a pacemaker with two or three leads (called a biventricular pacemaker).
A single-chamber pacemaker had one lead. The lead is usually attached to the right ventricle (the exact placement inside the ventricle may vary).
A dual-chamber pacemaker has two leads. One attaches to the right atrium. The other attaches to the right ventricle. Having two leads helps coordinate the signals that tell these chambers when to contract.

How a pacemaker adapts to your needs

When you're active, your heart beats at a faster pace to meet the body's need for more blood and oxygen. However, problems with the heart's electrical system can prevent the heart from speeding up. To fix this problem, all pacemakers have a rate-responsive feature. This means they can automatically adjust your heart rate as needed. The pacemaker speeds up when you're active, and returns to a normal pace when you're resting. 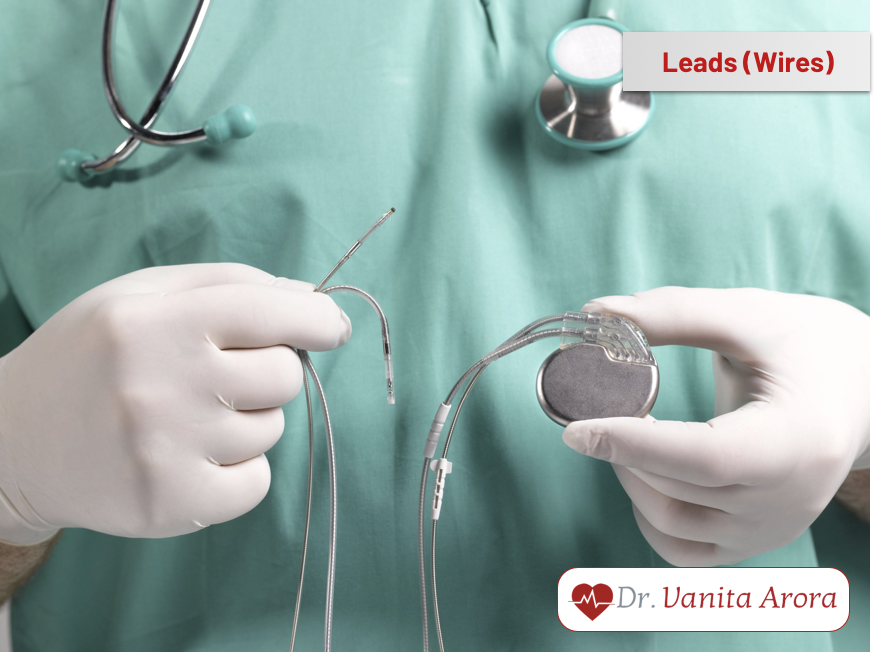 The implantation procedure
Placing a pacemaker inside the body is called implantation. This is not the same as open heart surgery. Instead, it's a relatively minor procedure done in an operating room or cardiac catheterization lab. A pacemaker can be implanted in either side of the chest, but is most often placed on the left side. The procedure usually takes 1 to 2 hours.
Getting ready for your procedure
Follow all your doctor's instructions to prepare for the procedure. You may be asked to do the following:
Before implantation
During the procedure
The most common method for implanting a pacemaker is called endocardial ("inside the heart") implantation. This means that theleads run directly from the generator to the inside of your heart. In rare cases, the leads are attached to the outside of the heart. To implant the pacemaker:
Risks and complications
Although complications are rare, implantation does have certain risks:
After the procedure
In most cases, you'll stay on the monitored bed overnight after your procedure. Before you go home, you'll receive discharge instructions. These tell you how to care for your incision. They also list precautions that will help protect your pacemaker as you heal. If you have any questions, be sure to talk with your doctor or the nurses.

After the procedure, nurses will monitor your heart signals and check your incision. They can also provide medications for pain. Be sure to tell the nurses if you have any chest pain, shortness of breath, twitching, or hiccups. Once you are stabe, you'll be moved to a hospital room. There your pacemaker's functions and settings may be checked. You'll also have a chest x-ray. You can go home once your doctor says it's okay.

To help speed your recovery, be sure to follow all your doctor's instructions.

Caring for your incision

It's normal to have some pain and stiffness around your incision for a few days. over-the -counter pain medications can often help. If needed, your doctor may also prescribe pain medications. To care for the incision, use these tips:

When to call your doctor

Call your doctor if you have any of the following after your procedure:

How long will my pacemaker last?

Pacemakers are very reliable. The batteries usually last around 10 years. In rare cases, the leads may also wear out and need to be replaced.

Your pacemaker is sealed inside the generator. So replacing the battery also means replacing the entire generator. This is done with a procedure that is simpler and shorter than the initial implantation. Once the old generator is removed, the new generator will be placed in the same 'pocket' in your chest. You can go home the same day. 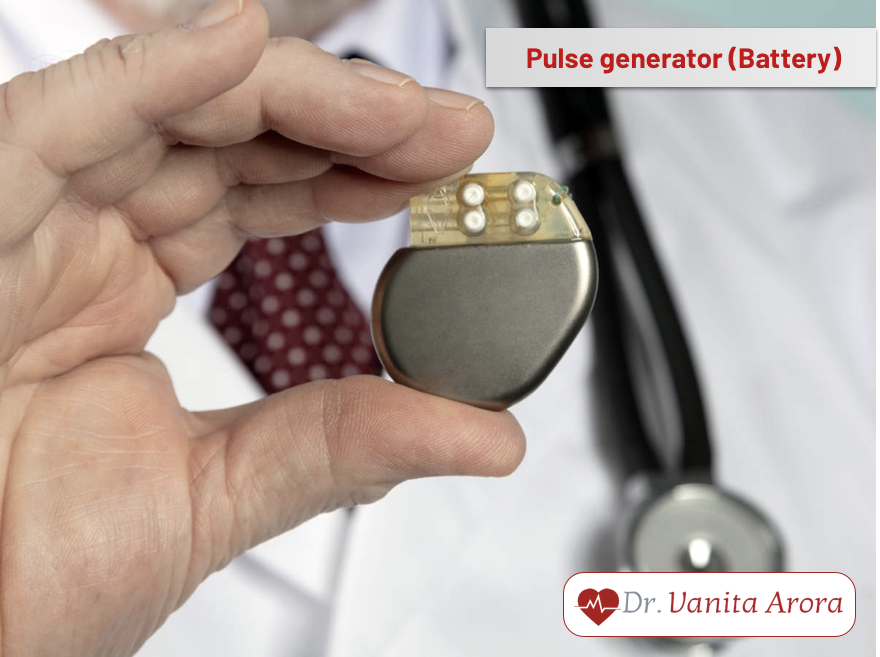 Replacing the leads
To replace leads, you'll have a procedure that is very similar to the one used to implant the pacemaker. In some cases, though, the new leads may need to be placed in a different vein on the opposite side of the chest. This means that the generator will also have to be moved to the opposite side of the chest.
Living with a pacemaker
Living with the pacemaker isn't hard. Its safe for you to do almost any activity you like. There are few things, though, that you'll need to keep in mind. These include being aware of electronic signals that could interfere with your pacemaker. You'll also need to carry a pacemaker ID card. And to keep your heart in good shape, be sure to get regular exercise and see your doctor for checkups.
Your pacemaker and outside signals
Most machines and devices will NOT interfere with your pacemaker. For example, it's safe safe to use microwave ovens, computers, radios, and televisions. Hair dryers, electric blankets and most power tools are also okay. However, you will need to use caution around certain devices. If you are not sure whether a device is safe, ask your doctor or call the pacemaker manufacturer.
Signals that can cause problems
A few things can create signals that may interfere with your pacemaker. In general, these signals wont permanently damage your device- or harm your heart. You should contact your doctor, though, if any of the following cause symptoms:
Carry ID card
You will receive an ID card that contains important information about your pacemaker. Show the ID card to any healthcare provider you visit. You may also need to show the card to security staff at times. This is because pacemakers tend to set off the security devices found in the stores and libraries. likewise , be sure to show your card to the security guards at the airport. This lets them know to follow special procedures that prevent the security wand from interfering with your pacemaker.
Exercise regularly
Having a pacemaker doesn't mean you can't be active. In fact, you may find that exercising is even easier with a pacemaker. For best results, try to be active at least 30 minutes each day. Most activities are fine. But talk with your doctor if you play contact sports or do weightlifting. In some cases, these could damage your pacemaker. And if you are not sure where to begin, ask your doctor for advice. He or she can help design an exercise program that fits your needs.
Keep seeing your doctor
To get the best results from your pacemaker, keep seeing your doctor for regular checkups. These let your doctor review your heart's electrical activity. They also make sure the pacemaker is doing all it can fro your heart. And if you have any symptoms that concern you, be sure to give your doctor a call.
Feeling good again
A pacemaker is a small device, but it can make a big improvement in how you feel. By keeping your heartbeat at the right pace, a pacemaker can allow you to be more active. It can also help you feel more confident about your heart and your health. This makes it easier to focus on the things in life that mean the most to you.
Book an appointment with the best cardiologist in South Delhi for more details