How is Catheter Ablation performed?

Cardiac ablation involves inserting several long, flexible tubes called catheters into your heart. The procedure is performed in a specially equipped room called electrophysiology lab. General anesthesia is required for the procedure. Medications will be given to relax and keep you comfortable during the procedure.
Access to vein and/or artery is obtained with needles and small tubes. One or more catheters are then inserted and threaded into the heart. After the diagnostic catheters have been placed, they are used to “map” the particular areas of the heart responsible for your arrhythmia.
In some cases, a small puncture may be made in the wall that separates the left and right atria in order to navigate a catheter into the left atrium. This is called a transseptal puncture.
A computer may also be used to generate three- dimensional models of your heart and map its electrical activity. These models and maps can be used to locate areas responsible for an arrhythmia more quickly and accurately.
After your arrhythmia has been mapped, a special ablation catheter is inserted into the heart. Electrical energy is then delivered to precisely targeted areas to disrupt the abnormal electrical pathways and restore a normal heart rhythm. In most cases, areas around the pulmonary veins are ablated. These are the four veins that connect the left atrium to lungs. However, other areas may be ablated as well.

After a Catheter Ablation procedure

After the catheter ablation procedure has been completed, the catheters will be removed and you will be monitored in the recovery area. Generally, you will be allowed to go home on the day of the procedure or after an overnight stay in the hospital.
Your doctor will provide you with a follow up plan. This could include the continued use of medications and possibly other therapies.
Your AF may disappear completely after an ablation procedure. However, some people may experience symptoms for three to six months after an ablation procedure. This is normal. In some cases, further treatment and/or ablation may be required.
Therefore, it is important to stay in touch with your doctor, keep follow-up appointments, and take all of your medications as prescribed during the recovery period. 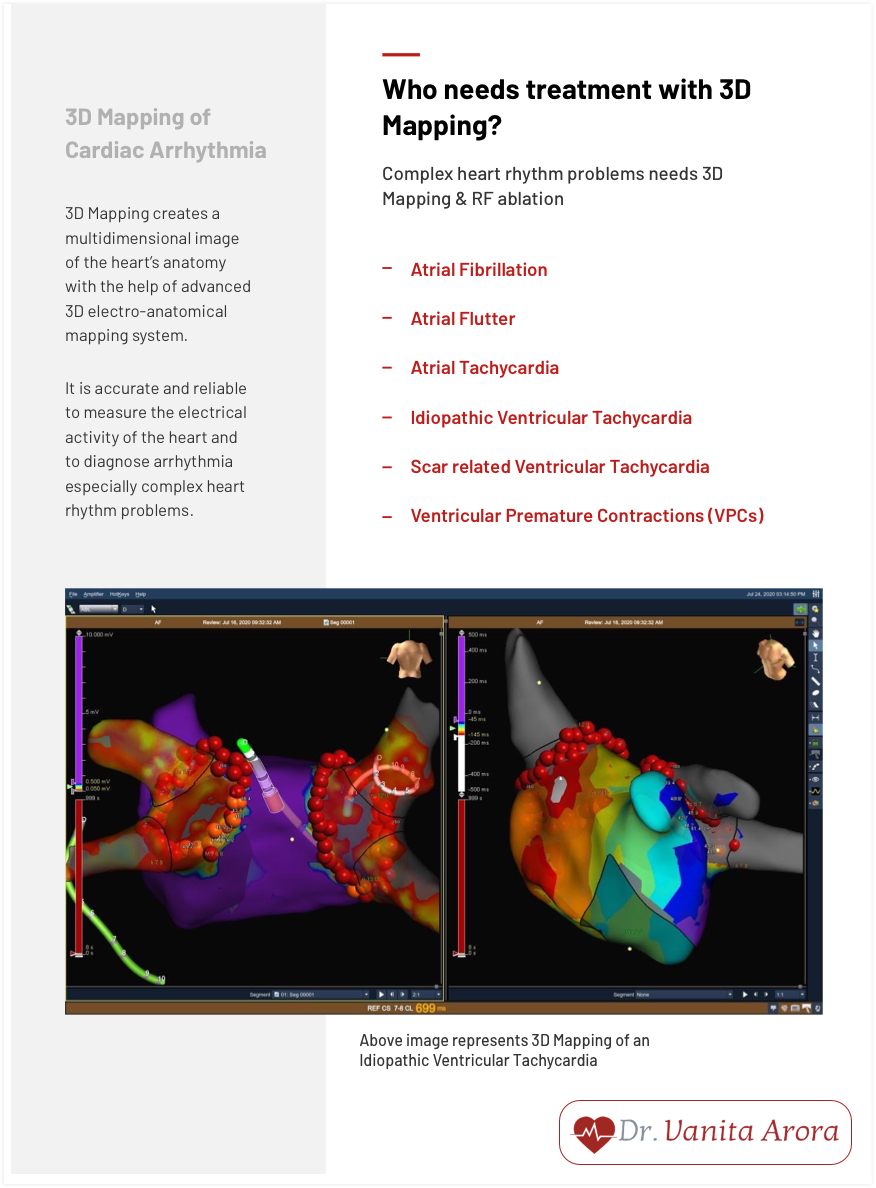 Like many cardiac procedures, ablation no longer requires a full frontal chest opening (sternotomy). Rather, ablation is a relatively non- invasive procedure that involves inserting catheters – narrow, flexible wires – into a blood vessel in the groin or neck, and advancing the wire into the heart. The journey from entry point to heart muscle is navigated by images created by a fluoroscope, an x-ray-like machine that provides continuous, "live" images of the catheters and the body.
Once the catheter reaches the heart, electrodes at the tip of the catheter gather data and a variety of electrical measurements are made. The data pinpoints the location causing the arrhythmia. During this “electrical mapping,” the cardiac arrhythmia specialist, an electrophysiologist, may sedate the patient and induce the very arrhythmias that are the crux of the problem. The events are safe, given the range of experts and resources close at hand, and are necessary to identify the precise location of the problematic tissue.
Once the source of arrhythmia is confirmed, energy is used to destroy that tissue, ending the dis- turbance of electrical flow through the heart and restoring a healthy heart rhythm. This energy may take the form of radiofrequency energy, which cauterizes or burns the tissue, or intense cold, which freezes, or cryoablates the tissue. Other energy sources are being investigated.
Patients rarely report pain, more often describing what they feel as discomfort. Some watch much of the procedure on monitors and occasionally ask questions. After the procedure, a patient remains still for four to six hours to ensure the vessel punctures seal up properly. Once mobile again, patients may feel stiff and achy from lying still for hours.

When is catheter ablation appropriate?

Many people have abnormal heart rhythms (arrhythmias) that cannot be controlled with lifestyle changes or medications. Some patients can- not or do not wish to take life-long antiarrhythmic medications and other drugs because of side effects that interfere with their quality of life.
Catheter ablation is used to treat rapid heartbeats that begin in the upper chambers, or atria, of the heart. As a group, these are known as supraventricular tachycardias, or SVTs. Types of SVTs are:
Catheter ablation can also treat heart rhythm disorders that begin in the heart’s lower chambers, (ventricles), such as ventricular tachycardia (VT), which can be a life-threatening arrhythmia.
For patients at risk for sudden cardiac death, ablation often is used along with an implantable cardioverter device (ICD). The ablation decreases the frequency of abnormal heart rhythms in the ventricles and therefore reduces the number of ICD shocks a patient may experience.
For many types of arrhythmias, catheter ablation is successful in 90-98 percent of cases – thus eliminating the need for open-heart surgeries or long-term drug therapies.
For many types of arrhythmias, catheter ablation is successful in 90-98% of cases. Book appointment hassle free with Electrophysiologist in India for the last 28 years - Dr.Vanita Arora.